I was rather hesitant to get a gluten free doughnut at the Easter Show.

I’ve had gluten free doughnuts before and I don’t really like them that much. They miss the body and flavour of a gluten doughnut.

Anyway, I had a chat with the people at the G-Free Donuts stand and they were so nice that I decided to try one. 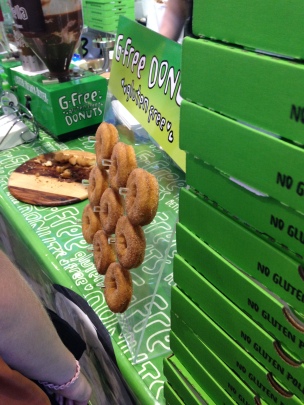 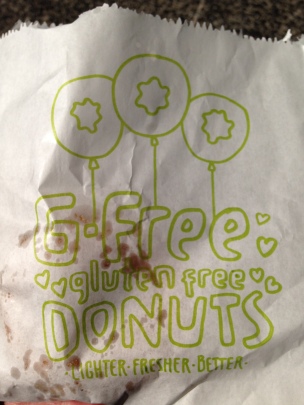 G-Free Donuts are based in Queensland. They have a regular market stand in the Newcastle area. It seems the only time they are in Sydney is for the Easter Show.

The doughnut was okay, but I’d still prefer a standard cinnamon doughnut.

I got a warm one which I looked forward to tucking into.

It was covered in lots of cinnamon sugar. I wondered if that was intentional to make the sweetness the overbearing flavour.

It fell apart very easily which I found strange. Even from the first bite, it broke.

It was very oily and the dough still had traces of oil and under-cooking. Not that I mind that too much.

The tagline at their stand at the Easter Show said “Lighter, Fresher, Better”. I don’t think they are necessarily ‘lighter’. ‘Fresher’ – well, that just depends on when you get them. And ‘better’ – certainly better than some lousy doughnuts you get at the Easter Show.

While these were good, if I had a choice between these doughnuts and gluten doughnuts, I’d choose the gluten ones. However, if you don’t have a choice, these aren’t too bad.