I’ve been to San Antonio Sourdough Bakery On Burton in Kirribilli a few times but have not seen cronuts there before. Doughnuts, but not cronuts. I had heard they had them. Perhaps all the other times, I visited at the wrong moment.

Anyway, I tried again, and lo and behold – cronuts!

I think they had the wrong sign on them. The sign said Chocolate Almond Cronuts, but they weren’t. They were plain with white icing that wasn’t almond. Little harm done there.

The people at San Antonio are always very nice and friendly.

And the cronut was excellent.

Crispy on the outside and ever so soft on the inside.

It was light and oily. It was coated in lots of sugar like most cronuts, and had hard plain icing on top – so hard it cracked very easily.

San Antonio Sourdough Bakery On Burton is a bit of a secret. It doesn’t show up in those Sydney’s Best Bakeries lists. Definitely worth a visit. 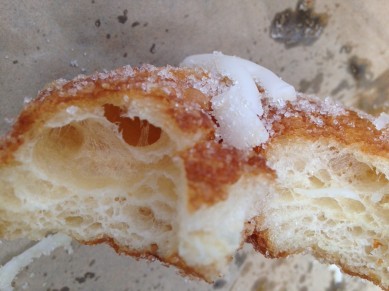 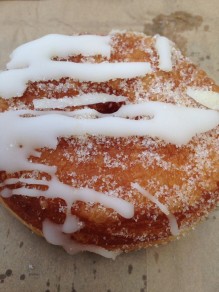 By the way, they don’t seem to have any web presence. Strange. That is except for my previous article.