Apollo Bay is a busy little place on the Great Ocean Road. Shops are on one side of the main drag and there’s a park on the other. Lots of tourists are dumped there to do a spot of shopping and fill their tummies. So, there are several places to grab some food – some tempting, and others aren’t my kind of thing.

When I arrived, I decided I was going to visit every single café and eating joint to see what the options were like, and most importantly, if they had any doughnuts.

Waves – café – known for its crêpes – no doughnuts. 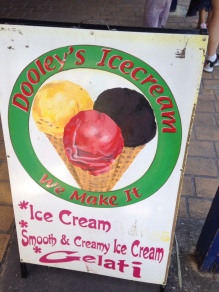 They also have a very good choice of sweet pastries, including doughnuts – iced and cinnamon.

On one visit, I got a cinnamon doughnut (as well as a tempting custard tart). The doughnut was okay, but not outstanding. They’re probably the kids’ range of sweets and certainly isn’t one of their hero lines. It was moist, airy and heavy. I’m sure the kids would be satisfied.

On my next visit, I got an iced doughnut. It had vanilla icing and blue and white sprinkles and dots, and those dreadful teeth-breaker balls. Those things should be banned by the Dental Association, or maybe they encourage it to promote business, the devious fiends. This doughnut was firm with just the right sweetness.

I will add that their service was excellent, and they handled everything hygienically. My daughter got a Cheeseburger Pie. Some people have no sense of good taste.

A brief note about the Icecream Tub: They had countless awards on the walls. One of their lines was Vegemite. I like Vegemite, but I thought as an ice-cream flavour was a bit extreme. I tried a bit but decided to stick to something more appealing. I went for Apricot Sorbet and Christmas Pudding. It was very nice.