I’ve been searching for a decent doughnut in the Gosford area for a while now, with no success whatsoever.

I am aware that a few doughnut stores have closed – one in Gosford (Snax4U – “The home of the all you can eat donuts”) and one in Erina (Hole In One Donuts). Surely, there is something wrong with the people from the Central Coast that doughnut stores close up shop.

Anyway, I gave Erina Fair a visit to see if there was a hidden gem waiting to be discovered and be revealed to the world via DomNuts – Sydney’s best doughnuts… and then some.

Erina Fair is a big but well laid-out shopping complex.

If you compare them, you’ll notice something unusual.

One’s got the new logo and shop fittings and one’s still sporting the old stuff. 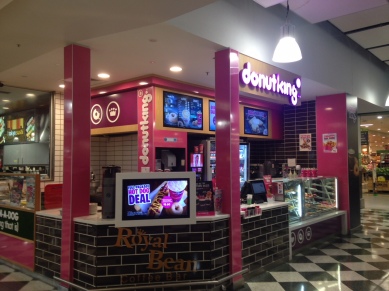 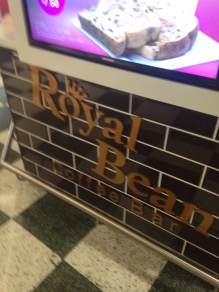 I was there early on a Saturday and the new one was up and running with a full display of doughnuts. Two women were ready and waiting for customers and gave me a friendly smile as I passed by. I get the feeling it was once a café called The Royal Bean, because the sign is still there. 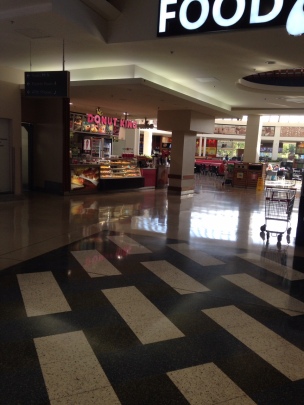 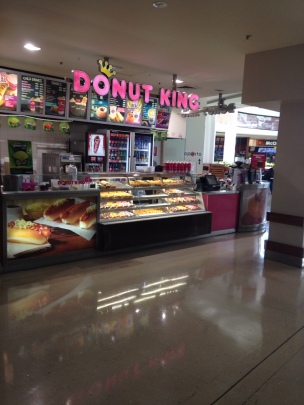 The old one was lagging well behind. The display case had shelves of bare doughnuts yet to be iced. A young girl was occasionally glancing from her phone to see who was passing by. I gave her the benefit of the doubt that she was on her phone for business purposes, but still, it’s a really bad look – staff on the phone is a customer service low point.

So if I were to buy a doughnut from a Donut King at Erina Fair, which would it be? Simple answer – the new one.

I did a bit of research to see when the old logo was replaced. The best I could find was a mention on Wikipedia that it was used up until late 2013.

There has been a lot of bad press about the owners of Donut King, RFG (Retail Food Group) lately and the way they treat their franchise holders.

An article published online on 6 June 2018 says RFG are in a lot of trouble, and are most likely to close Donut King outlets rather than their other operations such as Crust (pizza) and Gloria Jeans. RFG also owns Michel’s Patisserie, which is are also under threat of store closures. All up, they are looking at closing around 160 to 200 outlets before the end of 2018. According to Wikipedia, there are currently 360 franchised Donut King stores in Australia, but I’m not sure how up-to-date that figure is.

It makes me wonder what the franchise owners think of there being two Donut Kings in Erina Fair. They are a fair distance from each other, but still, this is the sort of thing that kills franchises – competition from their own brand.

And knowing the trouble RFG is in, would either of these two stores survive the impending cull?

By the way, I didn’t buy a doughnut from either Donut King at Erina Fair. I don’t buy Donut King doughnuts.

If you know of a decent doughnut on the Central Coast, let me know. My search continues.

One thought on “Doughnuts Beyond Sydney: NSW #3 – Erina”