The only reason people visit Dapto is to go to the dog racing.

Believe me, there’s nothing else there worth visiting. That is unless you’re craving a doughnut, then visit Fantasy Donuts.

You won’t get the world’s most incredible doughnut, but you’ll get a pretty decent one. A real down to earth, working class doughnut, which just about sums up Dapto.

When I approached the Fantasy Donuts stand in Dapto Mall, the young girl quickly asked me if I’d like something. There were so many choices, I needed a few moments to decide. I mean, it’s the first time I’d ever been to Dapto and possibly the last. I had to make my doughnut choice count. 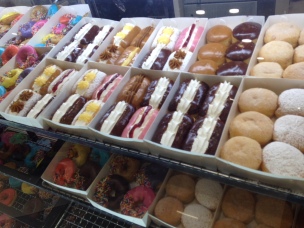 The girl was relentless. She didn’t take her eyes off me, and I don’t think it was due to my captivating good looks. She knew I was going to buy a doughnut and she wasn’t going to let me get away, as though her stare was keeping me magnetically attracted to the stand.

With the pressure of a glare on me, I went for an Apple Custard Doughnut plus a box of small Jam-Filled Doughnuts to take home to the family as a treat, proving that I have a kind-heart to go with my captivating looks. It was at that moment I realised just how much like Hugh Jackman I am. 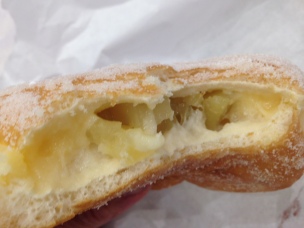 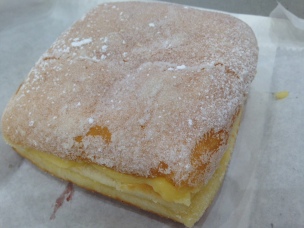 The Apple Custard Doughnut was nice. It was an interesting shape, I suppose it’s meant to look like a turnover, even though it was a doughnut. Predictably, the apple was tinned apple, which is not the greatest apple, but I’ll forgive them. It had a sugar coating that gave it some much-needed sweetness.

The Jam-Filled had a very light dough. The jam was good, not too runny, probably commercially bought jam, like the apple in the Apple Custard. There’s something beautiful about the image of the 6 Jam-Filled Doughnuts in their box. It’s the shape and the colour – beauty in the form of food.

If you find yourself in Dapto and the dogs aren’t running, go get a doughnut or two from Fantasy Doughnuts.