Imagine going to Germany and coming across a town called Tooheys. The streets are lined with gum trees and all the shops sell meat pies, lamingtons, Aussie lager, Vegemite and slouch hats. Sitting outside are stuffed kangaroos and koalas to let the tourists know that this shop is without question Australian. And Slim Dusty songs play night and day. That to an Australian is probably what Hahndorf looks like to a German.

Don’t get me wrong, the place is quaint. But I get the feeling it is cliché Germany. I haven’t been to Germany, but it doesn’t take a genius to sense Hahndorf’s atmosphere is rather forced.

Hahndorf is set in the Adelaide Hills, is the oldest German town in Australia and is a State Heritage area.

When we arrived, we headed straight for the tourist information office where I asked a helpful lady, “Which is the best bakery in Hahndorf?” She said the one directly across the street.

Before she could finish her sentence, I was walking into Hahndorf Kaffeehaus And Fine Foods.

Hahndorf Kaffeehaus And Fine Foods was busy that day. It had a selection of sweet items in the display case, including several doughnuts and variations, such as Pretzel Doughnuts. But something else caught my eye…

There was a tray of five mysterious looking things on the top shelf. I asked what they were. The lady described them as being a type of doughnut with apple and custard filling. They didn’t have a name because it was the first time they had offered them. Apparently, the cook likes to try different things from time to time. There was no way I could resist it. 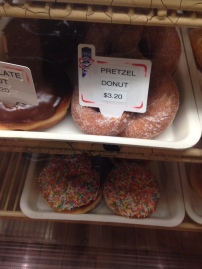 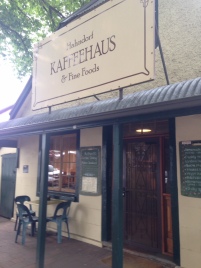 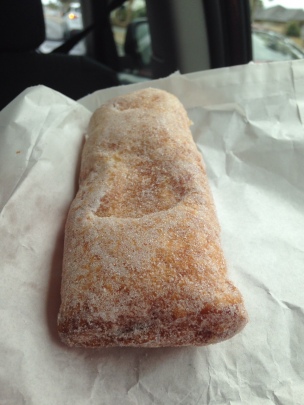 I can tell you it was very nice. It would have been spectacular warm with ice-cream. I guess it was a cross between a doughnut and a strudel. It had sugar coating. The pastry was thin. There wasn’t much custard in the filling.

I hope they keep this one on the menu.

Around the corner from Kaffeehaus is The German Cake Shop. Smaller and not as busy, it also had a selection of sweets in the display case. Tough decision, but I went for the Pretzel Doughnut – the one coated in cinnamon sugar.

This one was a little disappointing. The dough was tough and chewy. Perhaps it’s meant to be that way because it is part pretzel. But it really felt like it was at least a day old.

Also in Hahndorf is Otto’s Bakery, the self-declared ‘Best Bakery in the Hills’. They had lots of doughnuts, and I think I should have forgone the German Cake Shop and tried Otto’s instead. 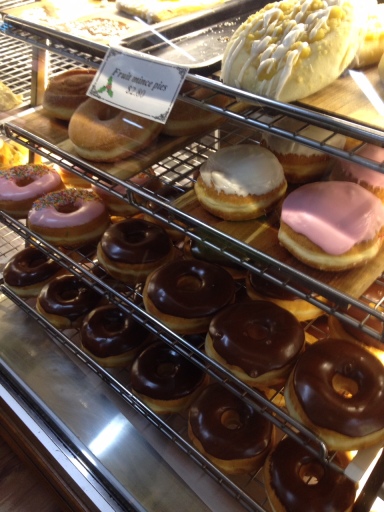 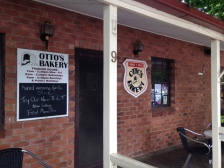 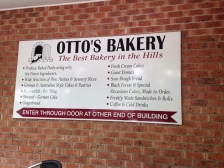 And finally in Hahndorf, I visited Farmgate Providore. They also had plenty of doughnuts, including lots with cream. I didn’t try any from Farmgate – you want me to put on weight?