I need to be upfront. I don’t eat Krispy Kreme Doughnuts. To me, they aren’t good enough.

However, I understand that many people love them and enjoy them and I respect that. We all make choices in life and if you’re a KK lover, while I will look down upon you like the doughnut snob that I am, I will nonetheless accept your decision like the tolerant person that I am.

I include Krispy Kreme here because I want to document the outlets at three Australian Airports that I saw within about 15 days of each other.

It’s interesting to note that no one else at the airports sells doughnuts, so KK must have an exclusivity contract, if that exists at the aiport.

It’s always been odd to me that they are called ‘Krispy Kreme’, because they are neither crispy or contain cream. I think this is a legacy of the company’s history.

They spell ‘doughnut’ in the traditional way, even in America.

KK is an interesting story, especially in Australia. They started in Winston-Salem, North Carolina (hey, I’ve been there), and their first store to open outside America was in Penrith in Sydney. Apparently, ex-NRL player, Paul Sironen was on the management team as the Fundraising Manager. According to his LinkedIn profile, he did this from 2002 to 2009.

I remember waiting in a queue to be one of the first at the store on York Street in the Sydney CBD. When people heard I’d scored some Krispy Kremes, they made a beeline there too, such was the frenzy they created.

They went through a period of rapid expansion. But then went through a tough time. There doesn’t seem to be much out there about exactly what happened but here’s my brief take on it:

They expanded far too quickly, expecting people to become addicted and somehow be KK regulars. It works for fast food outlets with a wide menu choice, like McDonalds, but not for small treats like doughnuts. Surely it doesn’t take a PhD in Rocket Surgery to work that out. Their business model was far too optimistic.

But I believe there was another contributing factor – their fundraising support program. Or more precisely, how they looked to get free exposure by getting involved in local fundraising programs.

The idea was that if you wanted to raise money for a sports club or school trip, KK would supply you with doughnuts to sell. Just like Cadbury do with their fundraising boxes of chocolates. You got them for, from memory, half price, and there was a minimum order of, again from memory, 30 dozen. It was a clever strategy – all these people were your shopfronts. But there was an inherent issue.

If you sold them, well and good. But if you didn’t, you had to reduce the cost. And here starts the problem. Suddenly the cost of a KK doughnut was half price. This devalued their doughnuts. That’s a universal problem with discounting – the lower price becomes the only price at which people are prepared to buy the product. So people would buy a fundraiser KK for half price and not be prepared to pay full price at a KK store.

The doughnuts had to be collected from the store, so it is most likely most of the fundraiser doughnuts were being sold close to a KK store. Instant competition. Not only that, but people were buying a fundraiser dozen at a time, so didn’t bother going to the store to get more. They had overdosed on KK and couldn’t face going back.

KK stores shut all over the place. They tried sub-leasing from other stores. I remember the one in my local video store. It just wasn’t the same. They were obviously brought in pre-cooked, not cooked on-site like the old stores. It clearly wasn’t working. You can also throw in things like increased competition from places like the aggressive franchises of Muffin Break and Michel’s Patisserie. 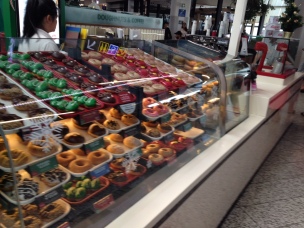 Worldwide, KK were in trouble. Especially so in Australia, and they went into voluntary administration. So the strategy had to change and fast. Somewhere, a genius stepped up.

They put their product where people are prepared to pay premium prices for virtually anything. Sports arenas, airports and 7-11 convenience stores. And as easily as that, KK again became solid in Australia. They still have the fund-raising option available, but I haven’t heard of anyone taking it up recently.

They still have several stores around Australia, including the airport outlets.

KK have 2 stores at Sydney Airport in the Domestic terminals. In Melbourne, they have three at the airport. According to their website, KK in South Australia is run as a separate business – Peregrine Corporation. They have one site at Adelaide Airport.

I admire Krispy Kreme for the way they bounced back. But I just don’t enjoy their doughnuts.

If you have any comments or perhaps inside information, please add it to the Comments section.

PS. Here’s an article from 2010, which includes some relevant comments. Interestingly, there is no mention of the fundraising side of the story, which I believe was a big contributing factor to their decline.