Sometimes you have to look hard, real hard, to find things.

It was while my family and I were driving in South Australia that we came across this little gem.

It’s a hole-in-the-wall waffle and jaffle joint, called, wait for it, ‘Waffles & Jaffles’.

Of all things you wouldn’t expect to find in the middle of nowhere, a waffle and jaffle joint is the wouldn’t-est.

I will point out, no doughnuts, just jaffles and waffles.

How did it get there? Who thought waffles and jaffles were the ideal products to plonk there? How does it make any money? Especially in the dead heat of summer? Waffles and jaffles aren’t exactly what you crave in summer.

It’s like going to the moon and finding a fro-yo and iced-tea joint. 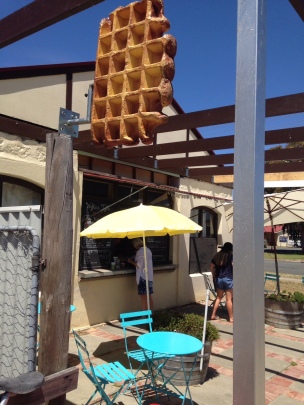 How we found it was that we were searching for the giant murals on the side of silos we had heard about. They are just down the road from Waffles & Jaffles, and look pretty amazing, and dare I say more of a tourist attraction than Waffles & Jaffles. 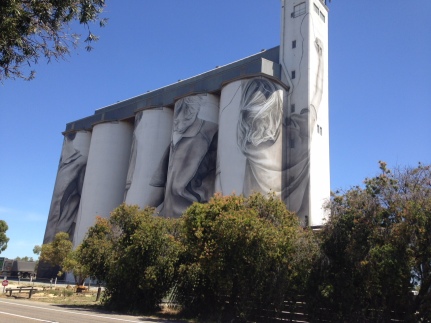 Waffles & Jaffles has a giant waffle out the front, so it’s hard to miss.

There is a bakery called Meningie Bakery a few doors away. They had a small selection of doughnuts but I didn’t feel like they made them there, so I didn’t try them.

My daughter had a waffle with caramel sauce.

It was enjoyable, she said.